Learn to defend your consumer rights

In this blog post we want to address a matter of the utmost importance that affects consumers. And we remind you that we are ALL Consumers.

Our right as consumers is too often forgotten, even by the victims themselves who, due to ignorance of the law, of adequate techniques or lack of time, do not resort to claiming the rights of which they are beneficiaries, and this, dear readers, is something that happens WORLDWIDE. Let’s analyze, then, some cases in which we go beyond our frustration and discover the way to be able to have fair compensation.

Have you ever been called, claiming knowledge of your personal data, from a company that you are no longer a part of to give you a super offer that we cannot refuse? It is more than possible that, when identifying ourselves, the first barrier of prudence falls since, when citing our data, it is as if they “know” us. If they also tell us that the call is going to be recorded for security or quality of service issues, we feel more at ease, right? All very legal and transparent. However, after the “other side” commercial offers us all the “advantages of our new contract” we will have said YES to something we really don’t even know. The “Scare” will come with the first payment (which may take some time) for a service that we may not even know what it is.

In cases related to a phone call there are several solutions. It’s no longer about blocking numbers we don’t know or putting them on the ROBINSON list. It is about the healthy habit of “recording” those conversations that involve us in some matter. There are hundreds of applications in the store apps (Google Play or Apple Store) that provide this service and once we have acquired this healthy habit of recording conversations, it will be very useful to be able to claim this vulnerability of our rights. How? Certifying the recorded call with Certifydoc and presenting said proof to the consumer association of our city. See the protocol in detail here.

We have seen in advertising (brochure, TV, web, mobile) some offer that has impressed us so much that we have decided to buy the product or service. The seller has kindly made us fill out a document/contract that has small print that does not correspond to what was advertised. When the time comes to enjoy this product or service, it is more expensive, it forces you to stay, it does not look like anything or it is of inferior quality to the one we had signed in the document. What can we do?

This case is very common and there is a clear increase in fraudulence due to the increasingly common use of online shopping, in which consumers are affected by compulsive buying syndrome. The solution to be able to defend our rights here is very easy. You just have to have the foresight and knowledge of what we want. Thus, it will suffice to take a photo of the brochure, screen, advertisement and certify it with Certifydoc. When we receive the product or service that we have contracted, if it does not meet our expectations, we will also photograph it and certify it. Thus generating evidence with a certain date and legal validity for any claim or complaint that we want to make.

CASE 3 – Changes in supply rates Something very common is the sudden increase in the amount on our utility bills that can come under the name of “insurance”, “maintenance service”, “roaming” or “permanence” etc. We have noticed the abuse and we want to find out what happened, for this the only way is to give our private data in a registration form to access a private area, since there is no other way to contact the supply company. How can we claim and eliminate these abusive fees?

Take photos or videos of previous invoices in which the new amount did not exist and of current abusive invoices. It does not matter if they are on paper or if you view them from the company’s online portal. Certify these documents with Certifydoc and request the alleged contracts or recordings to allege the documentation in the consumer association.

A look at global regulations

For the most curious we are giving some links and sources from the United Nations to our own country on consumer protection.

Directive 2011/83/EU on consumer rights stands out in particular.

Among others, we mention, in relation to claims, the following rules:

It is important to know that consumer rights are so relevant that they are found as a basic principle even in the Spanish constitution of 1978. Find more information at this link from the Ministry of Health, Consumer Affairs and Social Welfare. From the website of the same ministry we can find the reference laws, ordered by state law and regional law. We can see that the regulations are very fragmented since it depends on the sector or perspective you want to know.

How to resolve a dispute?

Obviously the three cases exposed above are some examples, there are many more use cases with resolution, for example:

– Very delicate cases such as fraudulent job offers, in which they charge money to access false interviews.

The processes to prevent and defend themselves are mechanisms so complex that citizens alone cannot cope with it, the regulatory structure is fundamental but it is not enough. For this reason, there are consumer associations, protocols and essential tools to present high probative value evidence that will allow us to negotiate out of court or go to trial.

How do we prepare our tests and what tools can we use? Following the protocol recommended by Certifydoc to obtain the qualified time stamp certifications from the EU authorities.

The fastest way to explain protocol and tool is described in the following infographic on misleading advertising: 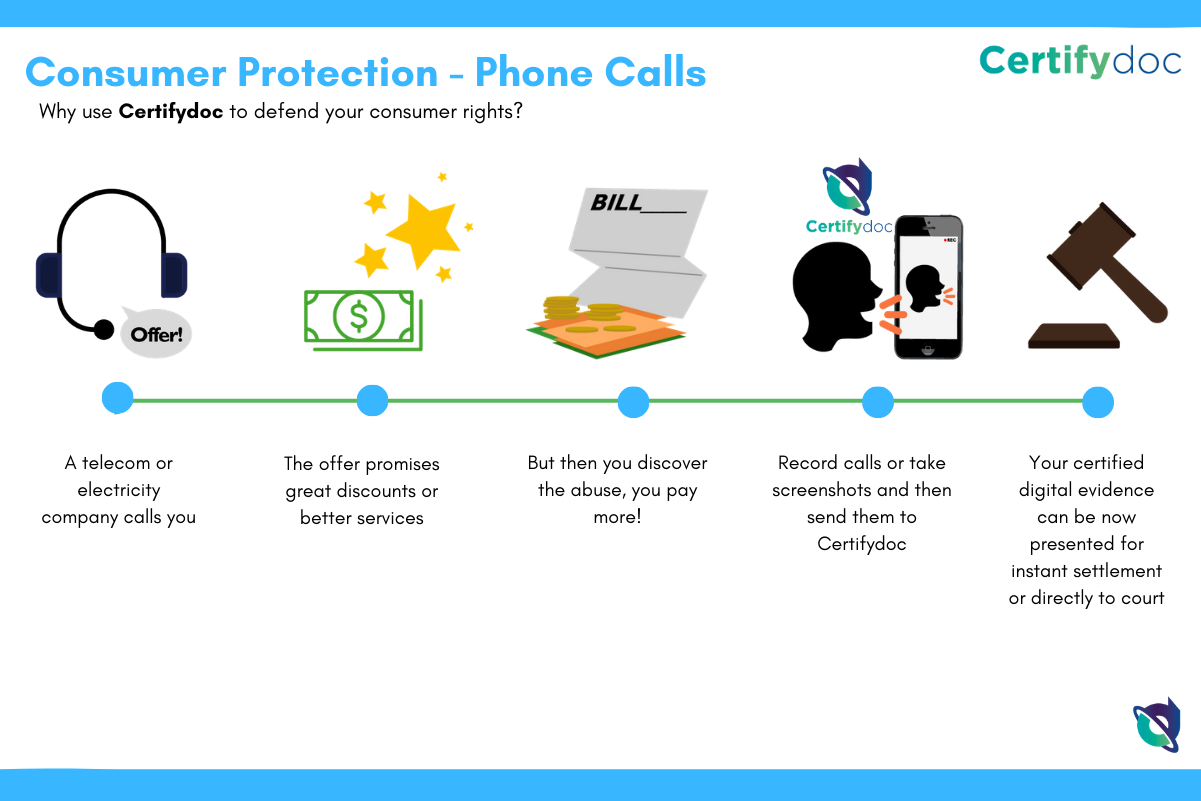 In this link you can find the directory offered by the Ministry of health, consumption and social welfare of consumer associations.

You can also find very interesting information at the European Consumer Center for Spain.

As usual in my articles, I attach sources and statistics of the cases treated at a global, European and local level. In this case, the figures and graphs that I have consulted have given results that are too extensive and sectoral. The data that I attach for Spain can give an idea of ​​the magnitude of the problem.

We start with the absolute figures of complaints by consumer organizations from 2007 to 2013. Source: Council of Consumers and Users of the Ministry of Health, Consumption and Social Welfare, complaints 2013

As we can see, consumers make millions of complaints each year and we can see how it is distributed in the following Epdata graphs. By industry in ES.